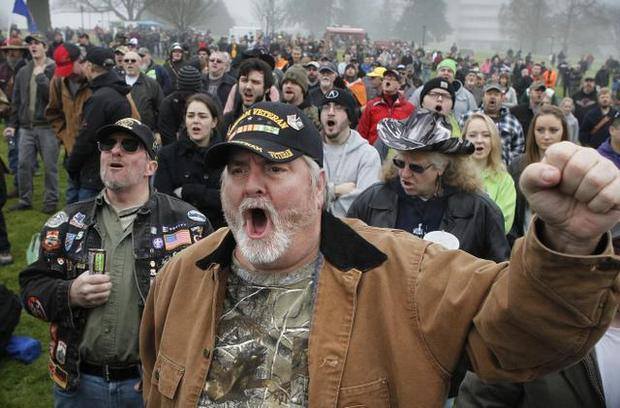 White fear might be the only thing that can match the girth of American greed. This particular strain of fear is always present, but every few years it detonates from leftover racial issues that have been swept under the rug and excused without too much reflection. White fear suckles from the breasts of ignorance, exploding when it can no longer swallow the reality of its bloated tummy; or when a black person gains a privilege they were never meant to have. White fear is a catalyst of hatred violence. White fear led to stricter conditions on slaves after Nat Turner’s Rebellion, in addition to about 200 reported murders of innocent slaves. White fear led to the creation of the KKK, due to the delicate condition of white Southerners after the crushing of the confederacy. White fear, for nearly a century, murdered thousands of blacks over whose names we will never know because of their voting aspirations or imagined rapes. White fear led to white flight and urban decay. White fear gave us church bombings and church shootings. White fear is what makes Blue Lives Matters supporters so delusional. White fear can simmer for years before fully boiling into a burst of violent, vengeful, and virulent activity. What are white people so afraid of?

It depends on who you ask (or whose epithet drenched facebook rants you analyze for deeper meaning). When it comes to black people, why do whites fear us? The first and most obvious fear is that we will somehow overpower them and drain them of their privileges, paying them back for centuries of slavery, murder, rape, and disadvantages. To them, “Black Power” means “White Subservience,” because white power means black subservience. Their second trepidation may be racial impurity, in which the alarming prevalence of interracial couples and mixed babies have them entirely fucked up and concerned about the continuation of the white race. Lastly, the fear of other. The others are those who not only threaten physical safety, but the status quo. To say it more simply, many white people are afraid of change. Many, whether they admit it out loud or not, want the old America back, where they had all of the power and not just most of it. Goaded along by their ever-present fear and  propagandized narratives of vicious wars and heroes who did whatever possible to protect America, some racists fancy themselves as patriots.

These patriots have been socialized to believe that America is THEIR country, and that a threat to their personal beliefs or privileges is a threat to America. When racists say they love their country, they mean to say they love a particular version of it. Not the America that is constantly evolving. Not the America with a large number of its population trying to be more inclusive to others. They love the nation that puts white people above everyone else, instead of on the same level playing field. They adore the country that endorses their racial superiority so much that it has the power to overshadow whatever financial or intellectual blemishes they may experience. They worship the country that gives the bare minimum of privilege to minorities. When America tries to move away from these things, it means that the nation is in peril and must be saved. For some, this savior complex extends to other white male belongings too. White women must be saved from insatiable black men and evil feminists. Christianity, which they’ve been steeped in since childhood, must be saved from brainwashing liberals, nefarious Muslims, immoral atheists, and Zionists. Their guns must be kept safe from people who want to snatch their fundamental right to bear arms.

Some of these scared white people exercise their fear by being snarky in their daily life, swatting off accusations of racism under the weak protection of statements like “black on black crime” and “you guys have BET” when called out for saying something bigoted.  Others join the KKK and other white nationalist hate groups. Some even stockpile automatic weapons and food for a race war they believe is inevitable. Still, there are others who don’t go that route. As discovered by the FBI, many join law enforcement, where discrimination is apart of the history and job description. They have an outlet for their fear in that of black suspects, who they can beat on black bodies excessively without punishment. They can even shoot black children and claim their lives were in imminent danger, escaping with light slaps on the wrists. It doesn’t necessarily ease their fear, but serving as cops allows them to feel like heroes. To them, they’re saving the country. They rest easy knowing that other fearful white Americans also believe they are saving the country from scum. Others who dont venture into law enforcement also bring their fear with them to their own jobs, carrying out microaggressions to the black people they come in contact with or stalling their career growth when possible.

Then there is another group, mainly made up of white men who fashion themselves as the only possible saviors of white safety, white values, and white superiority. They usually call themselves white nationalists, but the media calls them Lone Wolves. “We have no skinheads, no real KKK, no one doing anything but talking on the internet. Well someone has to have the bravery to take it to the real world, and I guess that has to be me.” wrote mass murderer Dylan Roof in his manifesto. Like so many other violent white supremacists and lone wolves before him, he felt like a race war was brewing- and all he had to do was tip it off. It was his mission as a patriot. As a white man protecting his country. For America’s sake, it was justified. “I have to do it. You rape our women and you’re taking over our country. And you have to go.” he yelled as he barraged black churchgoers with bullets. Fearful whites dont just shoot up churches or mosques or get Darnell fired out of spite, or join their local police departments to have easier access to victims with less risks, however. White fear also elected Donald Trump.

Clearly, white fear is a dangerous problem. So what can we do about it? White allies have to speak up. White silence equals compliance. Call out your racist pals. Share knowledge. Dont be afraid to lose friends. Otherwise, dont call yourself a f****** ally. White feelings cannot be spared. That goes for you too, people of color. WE HAVE TO CALL PEOPLE OUT. “Agreeing to disagree” with racists and allowing two sides on issues that should only have one side is counterproductive. Everyone, particularly white people, needs to stop being so polite about the fact that so many white people are racists. Not all white people, we know… but shut up. There are plenty. Not just KKK racists or Dylan Roof racists, but a variety of species that all operate on the belief (whether conscious or subconscious) that whiteness is superior to everything else.  We cant afford to keep sweeping this centuries old problem under the rug and hoping nobody will notice or that it will just go away on its own. We need to talk about it. We need to stop presenting sanitized versions of it to white children, who absorb all the forms of racism that arent slave owning and lynch mobs; who then cant detect their socialized superiority complexes and blatant privileges. When they’re confronted with the truth about generational disadvantages leftover from slavery and institutional roadblocks set up for black people, they retract into an ignorant denial that only repeats the cycle of irrational white fear later on down the road. Its time to stop coddling white people through their fear. Im tired of it. Aren’t you?

Id love to hear your thoughts. Be sure to leave a comment.

BONUS: Watch this fascinating and horrifying interview starting at 7:10. Think about how common this attitude is in 2017!!! These people HATED change. They passed blame of hatred off to others, while supporting their ideas. Just watch.