I love food and I adore it even more when it’s combined with history. In this post, learn more about the origins of five popular foods. If you don’t see your favorite, email it to me so I can investigate it for the next installment of food history! 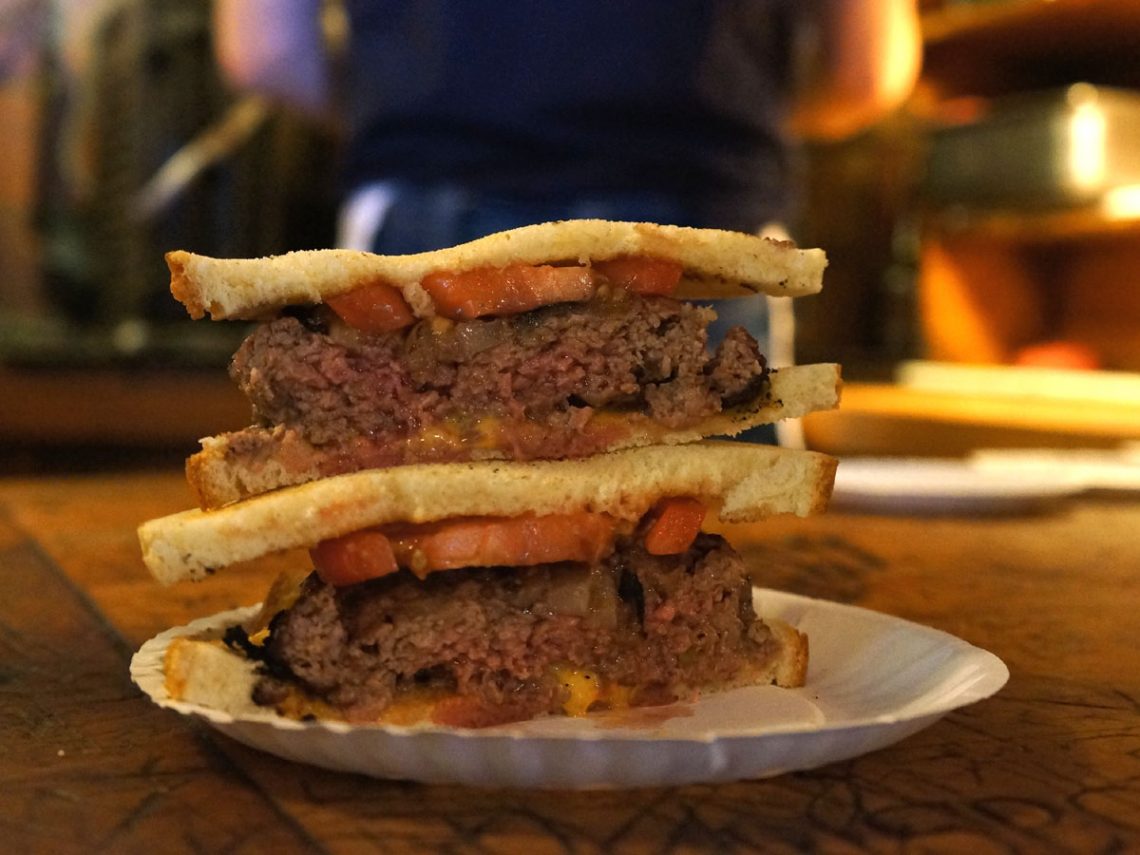 America’s first hamburger came to be in 1900 when Louis Lassen, lunch cart operator and family man, slid a heaping pile of ground meat between two slices of toast for a businessman on the go. What was born from that transaction was the famous “Louis’s Lunch” of New Haven, Connecticut. Louis’s family still uses his original recipe, creating his burgers in vertical cast iron stoves until they are medium rare. The burgers are served on toast- and your only options for condiments are onions, cheese spread, mustard, or tomatoes. Want some ketchup, mayo, or bbq sauce on your sandwich? Well thats too damned bad. All of those condiments are forbidden. Students from nearby Yale university have been kicked out of the establishment for sneaking in their own condiments. Harsh. 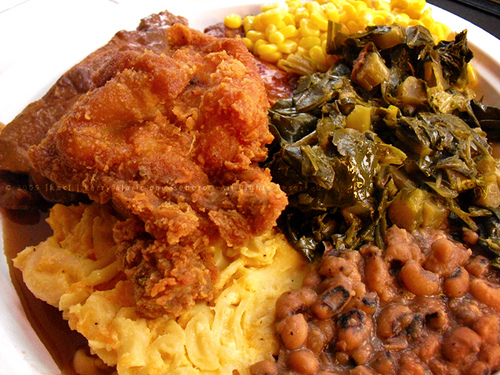 Soul Food didn’t become “Soul Food” until the 1960’s when African Americans were hell bent on reclaiming their culture. Along with terms like “Soul Brother” and “Soul Music”, they coined the popular artery clogging and well-seasoned food, “Soul Food”. This cuisine originated in the times of slavery when African slaves were given the undesirable and leftover cuts of meat. These included pig ears, pig small intestines (a popular dish of the poor medieval English and adapted by blacks into chitlins), the pig fat, the tails, hooves, and other parts the white folks didn’t want. They were also given “veggies” that were actually the tops of turnips and beets along with dandelions. Slave cooks began experimenting, finding new uses for once neglected greens like mustard, kale, and collards. They typically cooked and seasoned their veggies with pork products- and as the taste for yummy, fattening, and filling foods grew, pork became the main source of flavor for slave chefs. They also used onions, bay leaf, garlic, and thyme to spice things up. Early soul food chefs are also credited with creating cobblers. Until the 1950’s and the readily available supply of meat in supermarkets, many southern blacks regularly ate squirrel, rabbit, turtle, opossum, and raccoon. Typical ingredients for Soul Food recipes still used today are beans, greens, cornmeal, and pork. Today, many cooks who wish to have healthier soul food with the same taste substitute pork for turkey.

We all know and love French Fries- and if you say you don’t, you’re a liar or a sociopath. French Fries are readily available at the nearest fast food spot for a cheap price or they’re easy to make at home, thanks to frozen bags of spuds like Ore Ida. It’s hard to imagine a world without french fries. In the 1700’s, potatoes were believed to cause disease and have low nutritional value- so people didn’t really eat them. This all changed when Antoine August Parmentier, a veteran of the Seven Years War (during the majority of which he was imprisoned and fed only potatoes by the enemy) returned to his homeland of France and began fashioning recipes using potatoes. After intriguing nobility and the chic-set, he managed to get people all over France to begin growing potato fields and yielding the delicious harvests. Meanwhile, over in a small town in Belgium, it is believed that people would usually fish for their dinner in the nearby rivers and fry their catch- but this became exceptionally hard during the winters when rivers would freeze. Apparently, this is when Belgians first started slicing up potatoes and frying them as they did the fish. These two stories of origin have spawned a deep-rooted feud between the two countries regarding who made the first batch of French Fries- but I’m sure most of us really don’t give a fuck and are just happy somebody created the damned things. 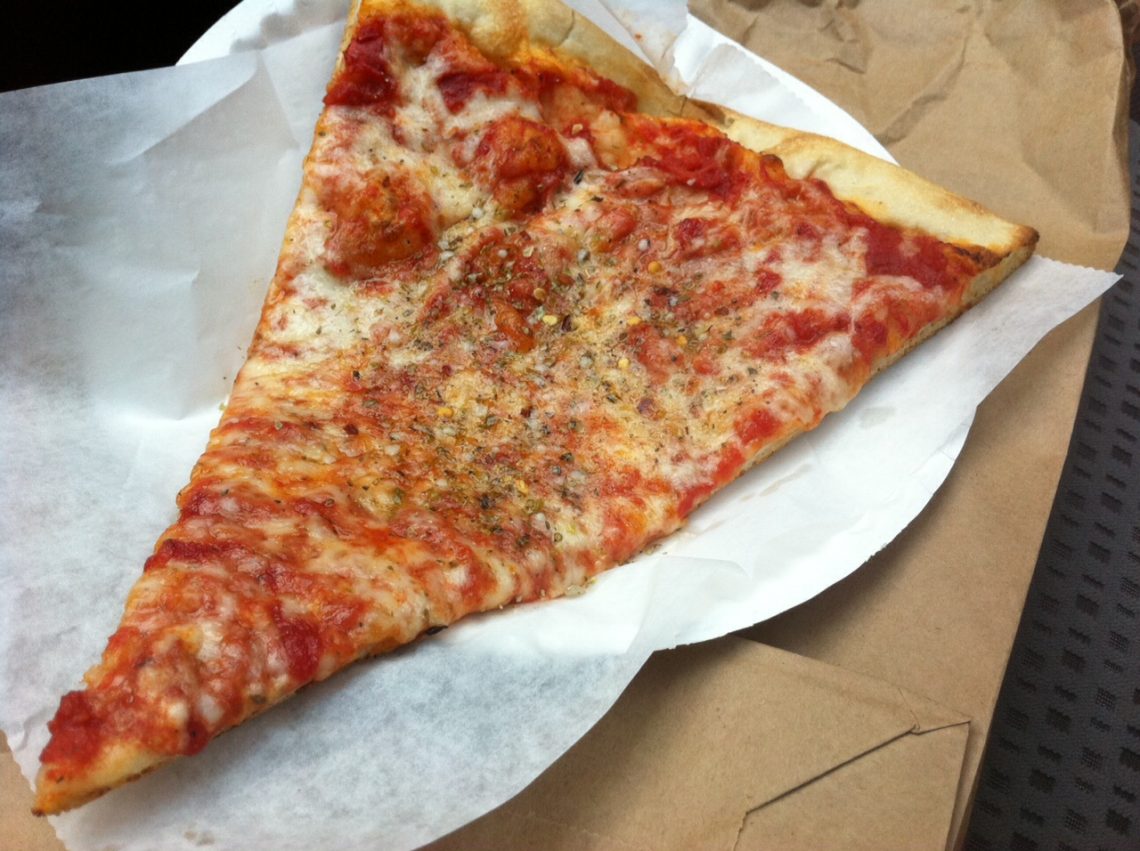 If you ask anybody from New York, they will tell you the best pizza you could ever eat in your life is in New York. While pizza isn’t my favorite food, I do admit that those dollar slices can really be gourmet when you’re starving. Where exactly to get that slice in New York- depends on who you ask. There are over 1600 pizza shops in the metropolitan area of New York alone. But it all began with one back in 1905. It was opened by Gennaro Lombardi, and simply named “Lombardis”. Because the original pizzas were cooked in coal fired brick ovens, the pizza style was large, wide, thin, and crispy- with a smoky flavor. An entire pie would go for 5 cents- but because of the poor financial status of most of his clientele, Lombardi would sell slices equivalent to whatever the customer had in their pocket. They would receive their slices fin a white paper with with string. Two employees under Lombardi, Antonio Totonno Reno and John Sasso, would go on to open their own pizzerias (Totonos in Coney Island and John’s in Manhattan). These stores would spawn more stores, and word of mouth quickly garnered an insatiable clientele. It is an urban legend that the minerals in NYC water is what makes New York Style pizza unique… so much so that some pizzerias in Non-New York locations ship NYC water for authenticity.

Despite the fact that humans have been pairing bread with meat and veggie fillings since at least the Ancient Greeks, the name “sandwich” officially debuted in 1762. The 4th Earl of Sandwich, John Montagu, created it by accident. He had a serious gambling problem that meant he’d sit at tables for hours betting money. During one of these gambling sprees he got hungry and asked the kitchen to bring him something handy to eat. He was presented with bread filled with meat. He loved it so much that he introduced it to his friends in London society. The creation came to be known as “sandwiches”.