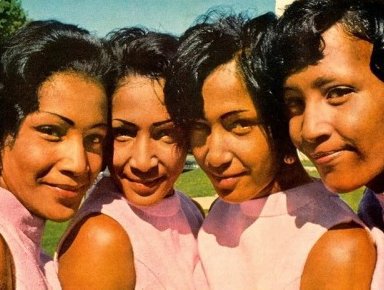 On May 23rd, 1946 in North Carolina, four seemingly identical quadruplets were born to a deaf and mute woman by the name of Annie Mae Fultz. Her husband wasn’t there with her; but a friend delivered the news to the ageing sharecropper that his wife had just pushed out three unexpected children. He was definitely shocked. The doctor who delivered the four baby girls was Fred R Klenner. Before he delivered these babies he was a small-town doctor with a tiny practice. Dr Klenner didn’t even have an incubator for the girls- he instead swathed them in cotton gauze and bundled them together for warmth. Klenner instantly realized that they were a definite cash cow. Why? The Fultz babies weren’t just quadruplets- they were negroes too. Their rarity was valuable. Dr Klenner named the girls himself, pairing the names of his female family members with ‘Mary’. He christened them Mary Alice, Mary Ann, Mary Louise, and Mary Catherine. In Jim Crow era North Carolina, its not like black people had the social authority to question anything white people did. A white stranger naming Mrs. Fultz’s children wasn’t anything anybody looked twice at. Mrs Fultz and her husband were already the parents of six, and they relied on measly earnings from tobacco sharecropping to get by. According to the quadruplets nurse Mrs Saylor, “You see the girl’s parents were just poor country people… Mr Fultz was already 59 years old, he already had a house full of kids, and his wife couldn’t talk or hear.” So when the girls were slapped on the cover of Ebony magazine in 1947 and began attracting sponsorship deals from baby formula companies across the country, there was little doubt that the Fultz’s would take any offers extended to them. Dr. Klenner eventually brokered a deal with PET milk on behalf of the quadruplets. PET agreed to hire a nurse to help the family, gave them a house on hilly acres of land, produced a monthly stipend of $350, and paid off the hospital bills from the birth. Having a single baby in 1947 cost about $70, or $764 in today’s money. All of this sounded extremely alluring to the Fultz family, so they agreed.

“[Pete Fultz] had never made more than $500 a year in his whole life,” Mrs Saylor told Ebony Magazine in 1968. While the benefits were relatively great, they came at a high price. After all, PET and Dr Klenner weren’t being nice to this negro family for no reason. For one thing, Dr. Klenner received monthly compensation from PET for essentially being the girls handler. Most black women breast fed instead of buying formula, and PET knew they could change this if they utilized the Fultz quadruplets correctly. And utilize they did. The girls appeared in dozens of ads for PET milk until their 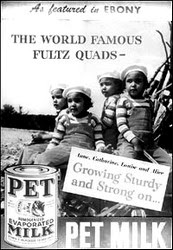 teenage years, and made regular appearances to promote that they were strong and healthy from PET milk. After four years of using the Fultz girls, PET had sold more formula than ever before. Dr. Klenner also exploited them when they were infants, calling them his “Vitamin C” babies and allowing people to come visit and watch them through a glass nursery from 2PM-4PM 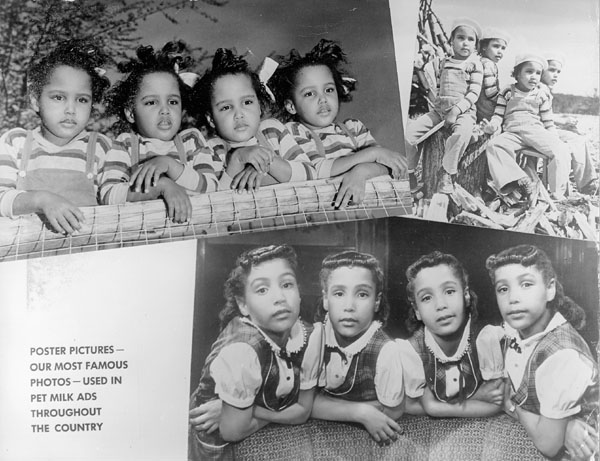 everyday at their home.

The Fultz quads were negro counterparts to the white Dionne quintuplets, but received much less than the millions the latter group received in a trust fund from the exploitative Canadian government. The Fultz’s four bedroom home was cramped with about 14 people, including the live-in nurse. Speaking of the live-in nurse, her salary wasn’t paid by PET. It was taken out of the $350 monthly stipend given to the girls for their appearances. After the nurses cut was taken out, it was just enough money to keep the family from qualifying for welfare. The land gifted to the quadruplets’ parents was barren and yielded no crops.

Though they spent most of their childhood being celebrities in their own right (they appeared on TV, their activities were reported by black publications, and they met several presidents), the Fultz quads would experience little personal success in the years that followed. During the Fultz quadruplets later teenage years, PET and the world lost interest in them. They were older, and no longer drank formula. It also didn’t help that the girls were no longer exactly identical, merely extremely close in resemblance. They were adopted by their nurse and her husband, and dabbled in musical performances before being offered a special scholarship to jointly attend Bethune Cookman College in Florida. 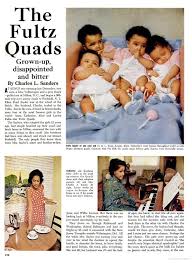 Unfortunately the girls found it hard to adjust to campus life and were asked to leave after two years. 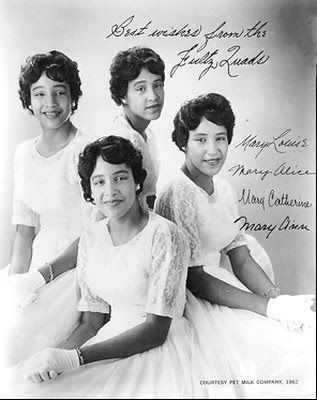 In 1968 Ebony Magazine tracked them down in New York for an interview. “They settled in an apartment and have lived there in Peekskill all the months since in half-secrecy, making almost no friends, allowing no photos or interviews, living with a certain bitterness, trying to forget the disappointments that have somewhat scarred their lives,” mused the article’s writer. Though the Fultz quadruplets had fattened the pockets of both PET and Dr. Klenner, they themselves were quite broke. They had been chewed up and spat out. Even though their novelty as milk drinking quadruplets had worn off, the girls still hoped to make it as music stars. In their interview with Ebony they expressed their sincere affirmation that they would be big, and that they weren’t done being famous. Unfortunately, their plans never came to fruition. The girls finished out their lives in relative obscurity, with three of them tragically dying of breast cancer at 45, 50, and 55, respectively. Little is known about the surviving sister, who was last heard from in 2002. They were some of the most famous black girls in the country during the 50’s and 60’s, but the Fultz quadruplets have been somewhat erased from history, which is made evident by the fact that they don’t even have a wikipedia page. They aren’t anywhere to be found on PET’s website or in their wikipedia article, despite being milked for their marketability by the company for years.