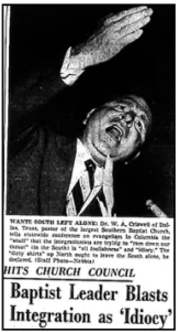 In February 1956, the pastor of the largest congregation in the Southern Baptist Convention, W.A. Criswell, stood before a sea of white Christians in Dallas, Texas and denounced integration as “idiocy”. Seething with anger at black churches and the NAACP, he called them “two by scathing good for nothing fellows who are trying to upset all of the things that we love as good old southern people and as good old southern baptists.” The crowd of good southern baptists roared with applause as Criswell joked “In heaven we’ll all be together.” Those six words reveal an ugly and complex truth about the relationship between evangelism and racism in this country, even over 70 years after they were uttered. Those six words illustrate that too many white Christians believe there is only room for equality and retrospect in the afterlife… but now is not the time. Five years after his scathing anti-integration speech, Criswell would claim Africans and their descendants were cursed by God to be servant people. The Hamitic myth was a common utterance from white Christians throughout the civil rights movement. While things like this aren’t said out loud anymore, the concept of black inferiority remains prevalent among evangelicals. The proof is in the schools.

A common misconception about the conservative religious right is that they were drawn together and empowered to political action after Roe vs Wade in 1973. Actually, it was not abortion that triggered white evangelicals, but integration. While black leaders—both religious and secular— celebrated forced desegregation in the 1960s, white leaders recoiled. Said Jerry Falwell Sr:

“If Chief Justice Warren and his associates had known God’s word and had desired to do the Lord’s will, I am quite confident that the 1954 decision would never have been made… the facilities should be separate. When God has drawn a line of distinction, we should not attempt to cross that line…the true negro does not want integration… he realizes his potential is far better among his own race…. [Integration] will destroy our race eventually. In one northern city, a pastor friend of mine tells me that a couple of opposite race live next door to his church as man and wife.” 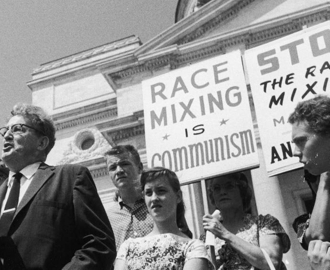 Despite Brown, white leaders saw a loophole. The ruling of Brown vs Board did not apply to private schools. White parents began yanking their children out of public schools. By 1974, roughly half a million white students were taken out of school. Industrious white investors erected private academies (aka segregation academies), where admission was limited to the right kind of student. In 1959, Prince Edward County of Virginia closed all their public schools to spite the black population. White private academies sprang up while public schools stayed closed until 1964.  Across the country, non-catholic Christian schools doubled enrollments between 1961 and 1971, and doubled again over the next ten years. Jerry Falwell Sr. himself founded Liberty Christian Academy in 1967. Pamphlets enticed parents with promises of curriculum laced with “traditional values” and anti-liberal rhetoric. Historian Jason Sokol noted, “[Christian school] supporters wanted to create a world where racial tensions did not exist, so they built schools where racial differences had no place.” These schools promised parents that black students wouldn’t be around to ruin their child’s education. To make matters worse, the educations provided in these schools indoctrinated students into white supremacy by downplaying or neglecting the role of minorities in America. Other schools promoted archaic ideas about scientific racism and evolution. Because these schools rejected government interference on religious grounds, they were allowed to run their schools as they saw fit. Unfortunately, bigotry was on the agenda. To make matters worse, because these schools were created as faith based institutions, they could claim tax exempt status. These schools became profitable.

In 1969, after black parents in Mississippi initiated a lawsuit to stop three private white only schools from getting tax exempt status, the IRS created a policy denying tax exemptions to segregated schools. The thinking was that discriminatory schools can’t be charitable, and therefore shouldn’t be tax exempt. Schools and leaders reacted. Bob Jones University (which sounds fake, btw) staunchly informed the IRS that it did not accept blacks. The IRS warned them to integrate, so Bob Jones University admitted one black student, who dropped out after a month. In 1975 they admitted blacks, but only if they were married. This was to discourage interracial dating. The IRS wasn’t pleased, and Bob Jones University lost tax exempt status in 1976. This sent a shockwave through the evangelical community. Enter Paul Weyrich, conservative political activist. Determined to turn evangelicals into a consolidated voting group, Weyrich had previously tried to use “porn, prayer in schools, the proposed equal rights amendment to the constitution [and] even abortion.” But nothing would stick until he got evangelicals to rally around keeping their schools nigger free.

The Moral Majority political organization was founded in 1979 by Jerry Falwell Sr., born from evangelical rage at “intervention against Christian schools.” They threw their support behind Ronald Reagan, abandoning the democrat Jimmy Carter who allowed the IRS to intervene at their schools. Only after this movement began did the Christian right also decide to target abortion, which had largely been a catholic issue through the 70s. In fact, southern baptists were encouraged to work for abortion legislation at the Southern Baptist Conventions in 1971, 1974, and 1976. Abortion issues suddenly became tied into the same neat package as “family values”, which also encompassed anti-miscegenation. “Family values” was something private schools could advocate for in the 80s without sounding super racist. In 1980, Ronald Reagan called out the IRS’s “unconstitutional regulatory agenda” against independent schools.  In 1982, the Reagan administration said it would defend Bob Jones University and its racial policies, citing family values. After minor outrage, Reagan backed off and said the courts would decide. The supreme court disagreed with Reagan’s stance, ruling against Bob Jones University 8-1 in 1983. The one person to vote in favor of Bob Jones University, William Rehnquist, was promoted to Chief Justice of the Supreme Court by Reagan in 1986. Ronald Reagan also appointed Robert Billings, the Moral Majority’s first executive director, to the Department of Education.

In 2016, 81% of white evangelicals voted for Donald Trump. They initially rallied around him when he made his political mark by accusing Obama of not being an American citizen. A group that prides itself on so-called family values elected a man who lies routinely, owned casinos, cheated on his wife, has been married multiple times, and admitted to sexually assaulting women. Jerry Falwell Jr, who inherited his father’s Liberty University as well as his unbridled racism, was asked to lead a taskforce on higher education by Trump in January. He has indicated that he finds the federal law banning discrimination in education as “burdensome.” Next, Trump nominated Betsy DeVos to be Secretary of Education, which delighted his evangelical supporters. Why? DeVos is a major promoter of school choice, in which parents are given vouchers to send their students off to private schools if they don’t want to be enrolled at public schools. The problem? First, vouchers don’t cover the full cost of tuition, rendering them virtually useless to low income students. Secondly, the number of predominately white private schools with discriminatory admission policies is growing, just like the percentage of segregated schools. With the Trump administration, there is a guarantee that this will operate unchecked. Time and time again, white parents have shown that if given the choice, they prefer to have their children enrolled at white schools. This wouldn’t be a problem if those schools didn’t have better resources than public schools that minorities are corralled into or if they didn’t promote white supremacy…. but they do.

In the present, 43% of private Christian schools have student bodies that are over 90% white.  These schools offer sugarcoated views of history that purposely avoid guilt or retrospection on American race relations, creating legions of white students who are incapable of seeing institutional racism for the true beast that it is. Ever look around and wonder why so many white teens in 2017 say bigoted things straight out of the 1950s? You can blame their parents and their shitty educations.

I’ve been asked numerous times why segregated schools are a big deal. The issue is that segregated schools operate on the basis of “separate but equal”, a wholly unattainable fallacy. Black students are more likely to attend low income schools that are predominately black, which can affect their future. Per The Atlantic, “Data is available for African American students in 97 large cities. In 83 of those 97 cities (or 85.6 percent), the majority of African American students attends schools where most of their classmates qualify as poor or low income. In 54 of those cities, at least 80 percent of black students attend schools where most of their classmates qualify as poor or low-income.” In that same article, “Researchers have found that the single-most powerful predictor of racial gaps in educational achievement is the extent to which students attend schools surrounded by other low-income students.” Basically? Going to poor schools and being surrounded by poor people does not promote success. Segregated schools are problematic for everyone, and will only continue to flourish while white evangelical Christians refuse to address racism amongst their own.

“In heaven we’ll all be together” was an easy cop out for W.A. Criswell. But it is an ideology— equality would come in the afterlife—that permeated the thinking of blacks and whites before he even uttered the words in 1956. When the tortured slave snuck off at night to worship in secret, the thought of the afterlife stayed with him or her. There wouldn’t be salvation in their lifetime, but in the next. Think of the highly popular song of the civil rights movement, Oh Freedom. “Before I’d be a slave, I’ll be buried in my grave, and go home to my lord and be free,” marchers would sing through tear gas and mayhem. When blacks have yearned for freedom this meant desiring full social, political, and economic equality to whites. In the song, freedom comes in death. If they don’t get what they’re asking for in their lifetime- equality, safety, peace- they’ll get it in death. As any 20th century black pastor would tell you, in heaven there would be no hierarchy. God loves all of his creations equally. But if racist white evangelicals had it their way, heaven would be divided into two separate segments. Just like the school system.

Segregation is Still Alive At These Christian Schools (Jonathan Merritt)

“Never Had I been So Blind”: W.A. Criswell’s “Change” On Racial Segregation (Curtis W. Freeman)

The Real Origin of the Religious Right (Randall Balmer)