Has weed gotten stronger over the years? The short answer? Yes. But here’s some context.

The concept of recreational weed was imported from Mexico along with a wave of immigrants in the early 20th century, and soon became a target of racist hatred. Boosted as “marijuana” specifically to promote prejudice, weed was considered as dangerous as Mexicans, especially during prohibition. Weed was also associated with black people and evil jazz music. During the Great Depression the hatred for Mexicans and Blacks intensified, and marijuana was caught in the crossfire. By 1931, twenty nine states passed laws restricting marijuana. In 1936, Reefer Madness depicted marijuana as a dangerous lure for white children into rape, murder, and suicide. 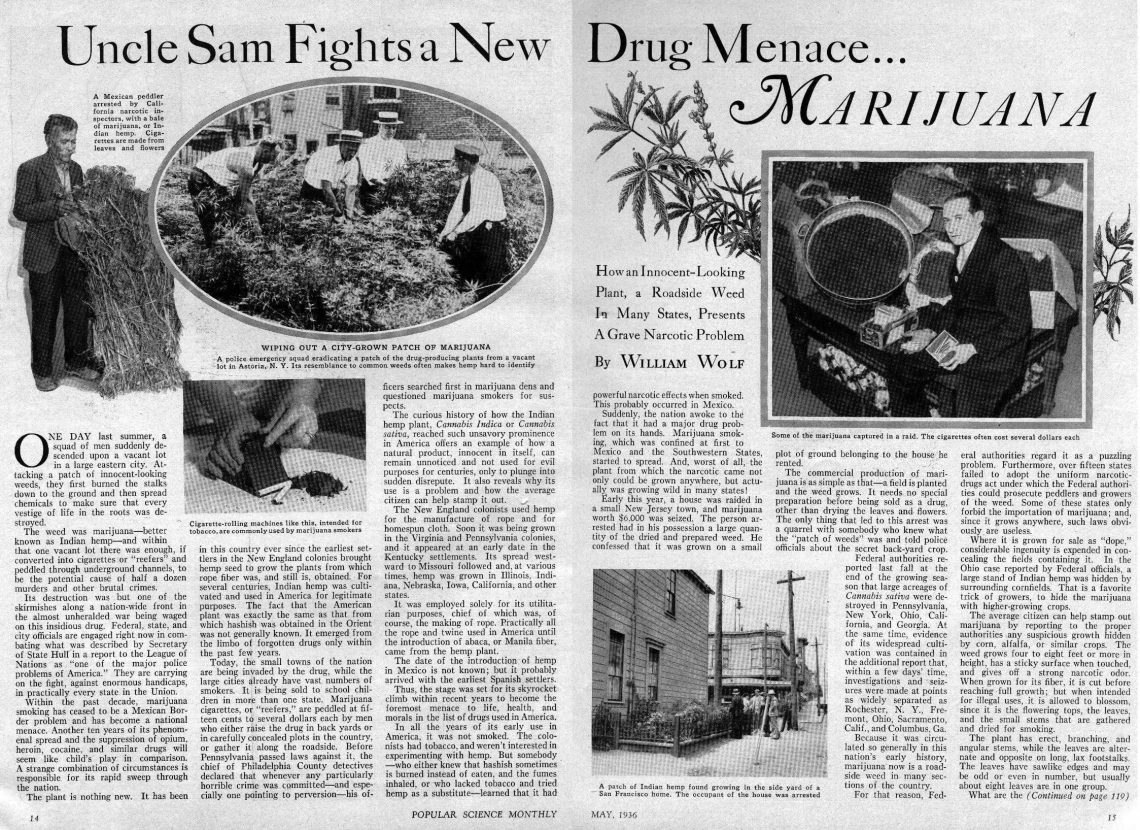 Though the memoirs I’ve read have made it clear that reefer has been present in many communities since the 1920’s, it wouldn’t be until the 1960’s that marijuana found its surreptitious stride among the American counterculture. In those days, when you wanted weed you took what you could get, and it was likely to be sativa. Buying grass involved shady settings, paranoid dealers, and real consequences that most of us could never imagine in 2017. Additionally, most of us can get our hands on some premium bud within minutes to hours- something smokers of the past could only dream about. Because possessing weed was a surefire way to get years of jail, fewer people took the risk of producing and selling it. In 1970, congress took a step in the right direction and eliminated mandatory minimum sentences for weed possession. By the 1980’s weed was being studied by scientists. Fast forward to 2017 and the science is speaking volumes about what kind of weed most of us are toking. Weed is now a billion dollar business, and the brand has been whitewashed and repackaged for American consumption. The marijuana pedaling Mexicans and the crazed reefer smoking negroes have been replaced by white college kids who just want to have a good time and sick people who need weed for pain relief.

While it’s important to remember that scientists have had to rely on weed seized by law enforcement (meaning they have probably missed out on quite a few strains over the past 40 years) it’s still pretty clear… this isn’t your grandmas reefer.

As with all facets of American capitalism, competition is driving the market. People who produce weed are in a constant battle to grow newer and better strains of weed than their peers. Places with recreational weed like Colorado have more potent products. There are some pretty outrageous claims about the strength of various strains in these places, but quite a few don’t hold up to scrutiny. For example in Denver smoke shops, discrepancies have been found regarding labels on edible products, in which the listed THC amount was higher than it’s actual amount. In one case a chocolate bar labeled as having 100 milligrams of THC actually had .37 milligrams. But this doesn’t mean the majority of American pot hasn’t gotten ridiculously strong. If you scroll through smoker forums on the internet, you’ll often see old-timers complaining about how fried they get off of a few tokes of today’s weed. They aren’t being dramatic, either. The science is saying weed has gotten a lot more potent. With potency comes problems.

The potency of weed has changed how the average person smokes.

Carl Hart of Columbia University mentioned that his lab tests marijuana usage by giving joints to subjects and allowing them to smoke for 3 minutes. “If we give them a low dose, they suck down the whole thing. With stronger material, you’ll see them give back the other half.” Basically, because weed is so much stronger, the average person smokes a lot less of it in one sitting. This is similar to the rarity in which the average person chugs down hard liquor in a single sitting. According to multiple studies, as you smoke more and more potent weed, you gradually become dependent on it as your tolerance grows. This sounds mighty similar to alcoholics, many of whom can pound hard liquor with ease. Another drawback to today’s potent weed? It has been shown to increase panic attacks and psychosis. As Live-Science reported, “Regular cannabis users also double their risk of experiencing psychotic symptoms and disorders such as disordered thinking, hallucinations and delusions — from about seven in 1,000 cases among nonusers to 14 in 1,000 among regular marijuana users.” This is probably why weed analysts are noticing an increase in users who want mellower pot. For some people, smoking weed is supposed to be like a glass of wine, not a party drug.

Despite the health risks and nostalgia for weaker weed, increasing interest in growing more potent marijuana has created an agricultural movement to create as many diverse potent strains as possible. With new names being cranked out everyday by some pothead determined to create the strongest weed of all time, its pretty obvious that the levels of THC will only get higher.

Marijuana and Your Health: What 20 Years of Science Reveals

Medical Marijuana ProCon: Is Marijuana Significantly More Potent Now Than in the Past?

Learn About Marijuana: Science Based Information for the Public