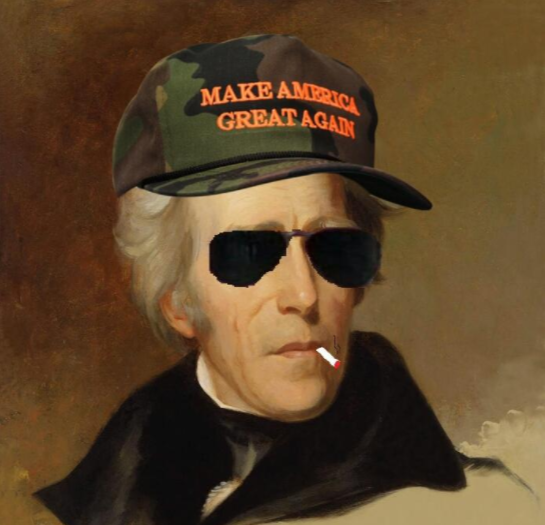 First up is Andrew Jackson… that guy on your $20 bills. 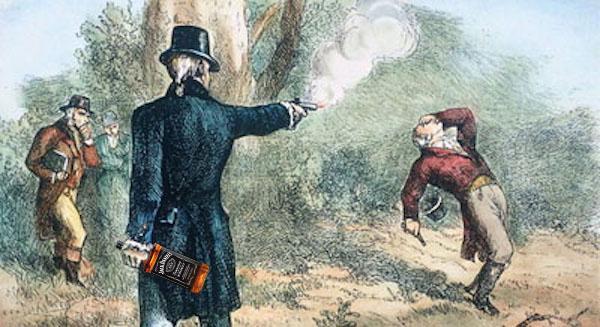 A temperamental whiskey loving redhead from Tennessee, Andrew Jackson would be the modern day equivalent of a redneck. On May 30th 1806, Jackson murdered another man who accused him of cheating on a horse race bet and insulted his wife. If you aren’t familiar on the rules of duelling, the two competitors were forced to stand completely still while their opponent aimed a shot at them from a measured distance. (You can read the complete rules of dueling here) Jackson was shot by his opponent Charles Dickinson, whose bullet lodged right next to Jackson’s heart. Jackson held steady and returned a shot, but it misfired. The duel was technically supposed to be over because of the misfire, but Jackson shot again anyways, instantly killing Dickinson. The bullet stayed inside of Jackson until his death, and it gave him pain throughout his life. This was just one of the many duels he participated in as a merchant, slave trader, and land speculator. Before being elected in 1828, he was a national celebrity thanks to his heroics during the War of 1812. As general, he directed the slaughter of hundreds of indigenous peoples in an effort to snatch their land. He also led the unexpected victory against the British in the Battle of New Orleans. He served as senator beginning in 1823 before moving to the presidency. He was the 7th president and the first democrat. His opponents called him Jackass, a nickname he liked so much that he used a donkey for his emblem, which stuck for the Democratic party. Upon being elected, he said he spoke for “the humble members of society- the farmer, mechanics, and laborers.” He said these words as if he was one of them, but Jackson was extremely wealthy and owned an empire of cotton plantations powered by slave labor. His words have been echoed in various forms by a smattering of presidents seeking to secure the vote of the downtrodden. He also pinpointed a group that was almost unanimously disliked: the native Americans. It wasn’t just his personal dislike of natives that drove his proceeding actions as president, but a calculated move to redirect the frustrations and anger of lower class whites to native Americans, not the wealthy upper-class. The natives were the ones taking up American land, and therefore American money… not the wealthy upper class (who was in fact buying up large tracts of land and paying people the bare minimum).  Jackson kept up his spirited attacks on natives during his presidency, sanctioning the kidnapping, rape, and murder of those unwilling to leave their land as “Indian Removal”. This was the era that begat the Trail of Tears, where Cherokee indians were forcibly marched from east of the Mississippi river to the Oklahoma region. About 4000 of the 15,000 moved perished. Oddly enough, he and his wife had adopted a pair of Creek indian orphans after the war of 1812 and raised them as their own. His administration looked onward as hateful and angry white Georgians drove Cherokee’s from land designated to them by federal treaty. In fact, his administration was largely made up of “Jacksonians”, fruits of the spoils system, loyal friends and family who Jackson had installed into his cabinet. One such person was Roger Taney, who Jackson nominated to the supreme court. Taney went on to make the infamous Dred Scott court case decision that black people were not legally citizens. Other Jacksonians were the legions of people who voted for him thanks to his pro-white, anti-native leanings. If you haven’t caught on by now, Jackson has quite a lot in common with Donald Dump. Both were celebrities who built their fortunes on real estate. Both participated in their eras most popular form of white supremacy: Jackson owned slaves, Donald engaged in housing discrimination. Like Jackson captured the hearts of white America with his toughness on natives, Donald has aroused the fervor of the simple and the hateful, the neglected and the naive thanks to his islamophobic rhetoric and thinly veiled racism. His own many misgivings have not stopped him from rising to what is supposed to be the most honorable position in the government. What’s a murderous duel or a confession of routinely sexually assaulting women when you’re promising to be tough on non-whites and maintain the status quo? Much like Jackson, Donald’s administration, filled with people who have played sycophant to his every whim, will look on when Muslims and other minorities are forcibly subjugated or harassed. Lets just hope in 200 years Donald Dumps face won’t be on any of our currency.

Fun Fact: At Jackson’s funeral, his pet parrot was removed from the service because of how many swear words it was repeating at mourners. These were words he learned from his master.