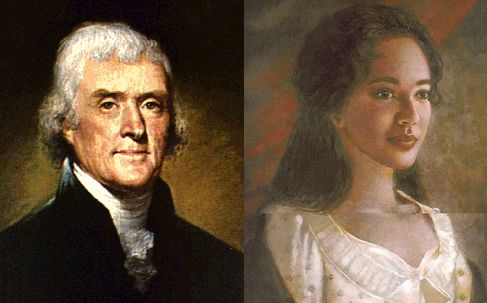 It was back in the year 1802 that a journalist by the name of James Callender published accusations that the third president of the United States, Thomas Jefferson, was siring a second family at his plantation, Monticello. The mother of the second family? Sally Hemings, one of his slaves. While she’s called a mistress in this articles title, she was actually more than likely his victim. This has been hotly debated by some descendants of the celebrated president, with some saying that Sally’s children were probably fathered by Jefferson’s brother or nephew, but there is no way. Thomas Jefferson was the pappy. A 1998 DNA test proved that Y chromosomes from Jefferson’s family proved with a 99% certainty that he had fathered the youngest of Sally’s children, Eston, in 1808. It is very likely that he fathered the others, because records show he stayed on the plantation when each conception occurred. Thomas Jefferson’s freaky business with Sally began around the French Revolution. He was a US ambassador in his mid-forties staying in Paris, and she was a 14 year old slave. She was brought over to watch his two daughters in 1787. Not a lot is known about Sally, except that she was light skinned, very pretty, and long haired. She was described as “mighty near white … very handsome, long straight hair down her back.” After spending approximately two years in Paris, Sally became pregnant with Jefferson’s child at 16. When Thomas was to make his return to America, Sally initially refused because under French law she was a free woman. Jefferson swore that he would free their children (he was clearly optimistic about impregnating her multiple times) at the age of 21 if she crossed the Atlantic with him. She succumbed to his desires and returned with him back to the states. He soon he became president. Her four children (of 6, the other two died in infancy) worked in the main house at Monticello, living alongside Jefferson’s two legitimate daughters and grandchildren. Visitors to the plantation were noted to have been startled to have meals served by a pair of polite young slaves who looked eerily like their master. In the 1820’s, Jefferson allowed two of Sally’s children to escape. These two children, Beverly and Madison, were so fair in complexion that they were able to enter Washington DC’s posh white society. In his will in 1826, Jefferson freed his other two sons, though he did not free Sally. Sally was freed by the family two years later. Historians estimate that there are over 150 descendants of Sally Hemings and Thomas Jefferson. The crazy thing about this whole scandal? During the time that he was having sex with(raping?) Sally and subsequently impregnating her, Jefferson was writing condemnations of sexual relations between blacks and whites.

FYI: The woman in the image is an artist’s rendering of Sally Hemings based on descriptions, as no images from her life have been uncovered

Read more about the relationship between Jefferson and Hemmings in these sources: